Khao Sok National Park was a complete fluke… I hadn’t planned on visiting the park as I really had no clue about it at all when initially planning out the trip! A friend of mine who was due to travel to Thailand a couple of weeks after me just happened to mention it in passing, and I thought “hmmmm let me google that”. I fell in love. I simply had to go after seeing the photos of the place… Do it! Google ‘Khao Sok National Park’ or just click on this link and prepare yourself for a visual orgasm!! It’s an absolutely breath-taking place! Just like a living “Jurassic Park” scene, minus the man-eating dinosaurs of course… If you’re going to Thailand and a nature lover, you MUST, and I mean MUST visit this place!

Ok… So here’s some information about Khao Sok for you all.

Khao Sok National park is located in the southern part of Thailand, in the Surat Thani province. It covers an area of 739 square kilometers and was established in 1980 as Thailand’s 22nd National Park. Some facts and figures regarding the topography of the park:

No wonder it looks like a scene from a prehistoric movie! The rainforest in this region is one of the oldest in the world, since Thailand has remained in a similar equatorial position throughout the last 160 million years. So this basically means that the climate in the area has remained relatively unaffected throughout time, even during the ice ages! When other parts of the world were suffering from severe drought, the Khao Sok region still received enough rainfall to sustain its forests and as during the last ice age sea levels fell to such an extent that there was a land bridge between Malaysia, Borneo and some of the Indonesian islands, many critters actually travelled to the area of the national park! So the place is basically a mecca of biodiversity and wildlife! Heaven!!! 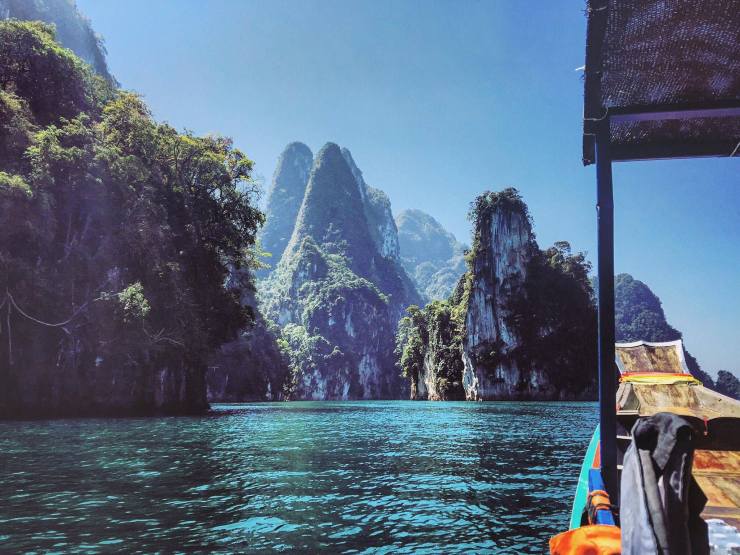 With 48 mammal species, 311 different species of birds, more than 30 species of bats and countless reptiles and insects the animal kingdom in Khao Sok is diverse to say the least! The park is home to the gorgeous and ever so elusive Tiger, the Malayan Sun Bear, Leopards, Macaques, Gibbons, Elephants, Deer, Gaur, Tapir, a number of rodents, a huge variety of birds, insects and reptiles (including a variety of Cobras!!). It is also home about 200 different floral species, including the famous Rafflesia – the largest flower in the world (growing up to 90cm in diameter!). If you do happen to see one though, don’t take a deep breath in! The flower is said to exude a strong odour, similar to that of a decaying carcass!!

Khao Sok is warm throughout the year, with the hottest months usually being March and April. The wettest months are usually between May and November, the driest being between December and April.

Ok, so there are a number of travel options to get to Khao Sok. We got there by getting a direct flight from Chiang Mai to Krabi…. Plan was to get on a mini van to Khao Sok, but I was violently sick with a horrible case of gastric flu the night before and I was drained of energy, so we decided to opt for a taxi ride from Krabi Airport to the park. It’s a long drive, about 2.5-3 hours, the ride itself cost us about €60.00 for two (that’s €30.00 per person). It’s a steep price, but I was very unwell and it was the safest option as I was likely to projectile vomit (or even worse….) at any moment during the trip. Even so, there are many other options to get to the park. You could basically land in three airports to begin with – Surat Thani, Krabi or Phuket. Then there are various options to choose from. Here’s a helpful link for all those interested in getting to the park via minivan or bus!

Once again, a plethora of options are available to any visitors of the park. You could even choose to stay in an amazing raft house directly on Cheow Larn Lake! Beware though, if you have a phobia of roaches (I do!!!), I would not recommend this… I read a few reviews about the raft houses and most visitors said that they did experience a visit or two from cockroaches when sleeping on the lake… It is the jungle after all, and unless you’re willing to spend a small fortune on a deluxe raft bungalow, the raft houses are pretty sparse (it’s basically a mattress and a sleeping net – communal toilets are found at the edge of each rows of raft houses). I went for a different option instead, opting to spend two night in a little hut in the jungle instead of staying directly on the lake. Sleeping in the jungle is such an experience. Listening to the sounds of the tree frogs, cicadas and the occasional howl of a gibbon is otherworldly, especially if you come from a little island with such limited wildlife, as I do. It was beautiful. The skies were so dark at night, and so full of stars!!! This was a perfect contrast to the two cities we had just visited before, it was a quasi-spiritual experience – a way to completely relax and just absorb the raw beauty of the wild environment around us. We stayed in ‘Our Jungle House’. You get to stay in an actual tree house, that’s right, a REAL LIFE TREE HOUSE, or else a small, yet very comfortable bungalow. All are very private and quiet, all within a their own little area of jungle. Perfect <3. It’s also a part of the Thai eco-tourism initiative… So it’s not only eco-friendly, but also ‘local friendly’. They use products grown and made in the local area, employ locals to work there, and the place is totally sustainable and does no harm to the environment within which it’s set.

There are nets all around the bungalows, to prevent any critters from getting in… That does NOT mean they won’t get in though… We had a huge black and yellow spider (about 20cm long) visit us during one of our nights there…. I hid in the bed’s mosquito net and yelled helpful anecdotes, whilst my brave boyfriend tried to escort spidey out, humanely of course (no spiders were harmed during the making of this blog)… We also had a large lizard look in on us from time to time when we were using the bathroom and shower. I didn’t mind that at all, he was a good conversationalist and just an adorable guy. Our little porch was full of tiny tree frogs during the night and I’m sure we had one huge resident gecko as well as a few jungle squirrels living in the roof of the hut. So yes, you’re going to get visited by animals during your stay… As I already said, this is the real deal… Make sure to lock the hut/treehouse doors when you’re leaving. The monkeys are very curious and amazing thieves, so if you don’t want your room ransacked, use the locks provided by the resort.

So we basically got to Khao Sok from Krabi airport (around 11:00AM) and had to spend the first part of the day travelling to get to the park – on arrival to “Our Jungle House” at around 2:00PM we were shown to our gorgeous bungalow, just next to a little river. As I wasn’t feeling very well we decided to take it easy for the afternoon, so we just relaxed in the bungalow, explored the jungle footpaths and waded in the river close to our bungalow. We had dinner at the resort’s cute little restaurant and called it a night as we were going to visit the Cheow Larn Lake the next day! 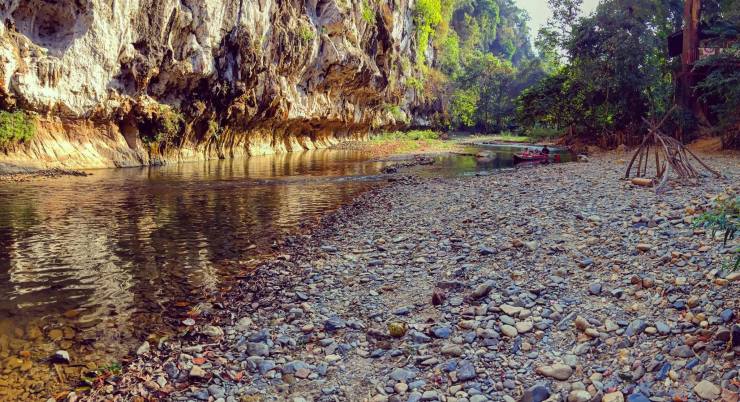 Tours around Khao Sok National Park are not cheap, but they are definitely worth the money spent. Do NOT be a hero and travel within the jungles alone. These are real life, actual jungles… There are wild animals there, most of which can be dangerous. I’m not saying a tiger’s going to pounce on you, but be aware that yes, it’s a real, actual, HUGE jungle. It’s easy to get lost in such thick vegetation, there are venomous snakes and insects around, and the terrain is not the easiest to move around it. If you want to explore, get a guide and enjoy yourself… You are NOT Tarzan or Mowgli from the Jungle Book… So you need a guide. There are tons of options to choose from when selecting tours of the park. I would have chosen all of them if I had the time, but I had to settle for just one day trip to the lake, as we only had one full day in the park. I would suggest spending at least two full days there if you really want to see the place. 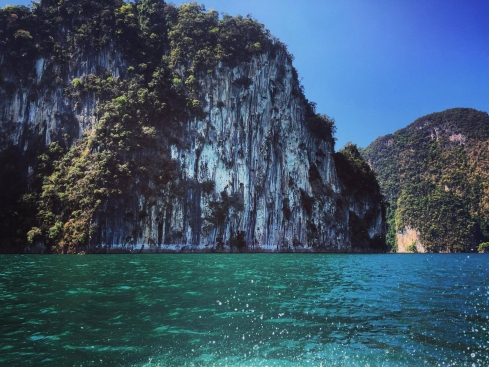 The lake itself is amazing – it’s man-made as it was created when a dam was built in 1982 to supply most of Thailand with electricity. Within the lake there are over 100 islands, with towering limestone cliffs, making the lake look like a scene from the movie Avatar! It was a fantastic day, starting off with a longboat tour of the lake, a delicious, freshly caught fish lunch at the bar at one of the raft house areas, and then ample time to swim and relax in the water! We had the option of going caving with our guide, but opted out, deciding we would rather just chill out near the raft houses for a couple of hours, and kayak around the area. Kayaks were free to borrow, all you need to do is leave a tiny safety deposit with the bar operator before using them – and off you go! I suck at kayaking, so I was a lousy kayak partner, but it was such a fun experience (albeit tiring)! I would do it again in a heart beat. 🙂 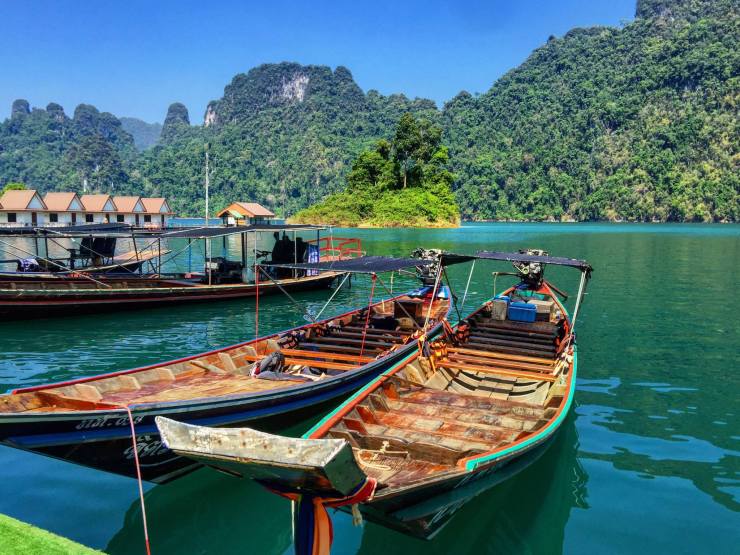 We were transported back to our beautiful little house in the jungle tired, tanned and extremely happy. Would I visit Khao Sok again should I return to Thailand? No questions asked…. I would spend at least three full days there, take some wildlife tours, as well as night tour, do some river tubing, maybe take a cooking course or visit the Khao Sok hot springs – the options are endless!

On the next day we were off again…. Moving towards Krabi to clock in some beach hours and work on our tan! That’s going to be the next part of my Thailand Adventure so keep an eye on the blog to keep yourself updated! Be sure to press ‘Follow’! You can also follow  me by liking my Facebook Page or following on Instagram @MalteseWanderer.